One of my daughters has a nightmare almost every night. It is not a reoccurring dream (the characters and details vary) but they always seem to have the theme of being chased or watching a family member being captured. When she relays the dreams to me I can agree that they are scary - they'd scare me! The villians are often men - old men, police men, robbers- but the other night she had a dream about a giant rooster.

Dreams about being chased ( by a giant rooster or otherwise) usually refer to feeling the need to escape a real life situation or feeling anxiety or fear about something. For children, chasing dreams are common; they are a way of coping with the stresses and unfamiliarity that they confront in life. Stressors like tension in the home or school issues can be triggers for these dreams. Interestingly, monsters in dreams can represent people in the child's life.

Bad dreams, however,are not necessarily a bad thing. Researchers in Finland have proposed that nightmares help us, and especially children, to prepare for real life situations. Interestingly, childhood's earliest dreams mirror those of our earlier ancestors when they dreamt of being chased by wild animals. Understanding this fact can help us to put nightmares into perspective and appreciate the role that they have in our waking life.

Helping my daughter cope with these dreams is an ongoing battle but I have come across some ideas that seem to help:

Robert Moss, in his helpful book, Active Dreaming, has some other suggestions for helping children through their nightmares such as drawing a picture, acting out the dream or thinking of a "dream companion" (such as a stuffy or icon like Jesus or the Incredible Hulk) that can help them out in the dream.

Let me know if you have come across any other solutions.
Posted by Lisa Loewen at 11:13 AM 3 comments: 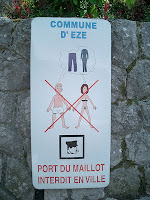 Yah, this post is a shameless experiment to see if a provocative title gets more readers, but it also isn't what you think. It is about naked teachers but I'm not talking about the fodder of adolescent boys' dreams. I'm talking about the dreams that teachers have (and it's a common one) where they are standing in front of a class, notice the class's strange reaction, suddenly look down and find that they have forgotten to put on clothes (usually pants). It's a classic and one that, as a teacher, I have often had before.

What does it mean? The image of being naked in a dream often means that you are fearing self exposure in real life situations. This can happen in any job situation, but the profession of teaching entails being vulnerable to the judgements of administration, students and parents on a daily basis. Suddenly finding yourself naked in a dream could also mean you feel guilty about something. You feel the need to "cover it up".

Usually these dreams happen during times of anxiety that could relate to teaching but also to any other areas of life where you are worried about failure or rejection. However, if your dream audience doesn't seems bothered by your nakedness you shouldn't fear being emotionally open in waking life. Jung saw nakedness in dreams as a desire for spiritual awakening. Apparently Freud's favourite dreams were about being naked in a crowd of people. Dude must have had a lot of self-confidence.


There are many other kinds of teacher dreams. Being naked is just one but it is classic. Ask any teacher.
Posted by Lisa Loewen at 8:26 AM 1 comment:

Email ThisBlogThis!Share to TwitterShare to FacebookShare to Pinterest
Labels: dreaming of being naked, dreams about being naked, naked teacher, teaching dreams

photo by Steve A. Johnson

I just listened to a radio broadcast by one of my favourite dream gurus, Robert Moss. He talked about the importance of "naming your dream" when trying to interpret it because the name that easily comes to you can provide the focus of the dream.

The dream I named "Mouthful of Pins" was actually quite long and contained lots of different symbols and scenes but I'll focus on one part. In this scene I had been given a large, beautiful wooden sewing box. It had lots of little drawers. Some were open and overflowing with ribbons (like place awards from a track-meet) and also little flags. One I recognized was from Great Britain. There was a sign above the box that said "Happy Mother's Day" but it changed back and forth to "Happy Anniversary". I wasn't sure if it was a gift from my spouse or my mother. Suddenly, I was aware that my mouth was full of pins. I couldn't speak because every time I did they would overflow from my mouth and prick me. I was trying to spit them out or pull them out with my hands but it hurt and I couldn't get them all.

The sewing box: boxes are containers and in dreams, containers "contain" stuff like our emotions. Sewing refers to mending or
fixing something. The ribbons could refer to my achievements. Flags, as dream symbols, usually represent values or ideas from the country they are displaying. In my case, my ancestral home is Great Britain so the flag could be a symbol of my family's traditions. (I neglected to mention I was also wearing a black and red tartan shift dress - very cool, very Vivienne Westwood, which also represents Britain).

In waking life, pins can be used to either hold something together or used to hurt (poke or prick). In my dream, they definitely hurt me, almost like someone was trying to pin my mouth shut. Mouths, as an images, symbolize the way we communicate.

The changing signs for mother's day versus anniversary, and whether the box originated with my mother or spouse, perhaps shows conflicting feelings about the different roles I play as wife, mother and daughter. Where is my "Self" in all this? Maybe it is the box that contains my achievements and traditions. Did the pins in my mouth come from the box (like these are the things that are preventing me from communicating)? Or should I have taken the pins out of my mouth and put them into the little drawers? (It seems like the pins would belong in there.)

Anyways, I love that this dream contained so many symbols that are rich in meaning. So now in waking life, I am trying to be aware of what things (long held beliefs, people's expectations) are holding me back from saying what I need to.
Posted by Lisa Loewen at 9:28 AM No comments: