Just as I was waking up from a dream this morning, I had a sudden image of a large, yellow and black striped spider perched on my left hand. It was really large - like almost the size of my hand, with a small body and huge spindly legs. Surprisingly, though, I wasn't afraid, but rather, very intrigued. It was quite beautiful.

Like dreaming of snakes and rats (see other posts here), dreaming of a spider can be really frightening. Spiders are an image that usually scares people. Of course it depends on your own preference and experiences with spiders. While some dream images are universal in meaning, they are always coloured by your own personal interpretation of what that image means to you. 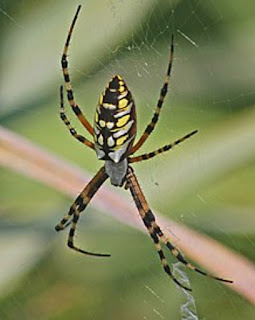 If we look at the aspects of spiders in real life, that can also give us some insight into what the symbol meant in our dreams. For example, a spider is a predatory and efficient hunter. It is also a creator of beautiful and intricate webs that require much patience to weave.

Spiders As An Image of Fear

Spiders As An Image of Good Luck

Since Medieval times, dreaming of spiders has been seen as an omen of good luck signifying the coming of prosperity and fortune.

Interestingly, we use the term "caught in a web of lies" or "she's spinning a web of lies" to illustrate when someone is being deceitful. It could also represent that you are feeling entangled or trapped. It is possible if you are dreaming of a spider in a web, it suggests this is going on in your life. On the positive side, the web can be seen as form of perfection and protection. 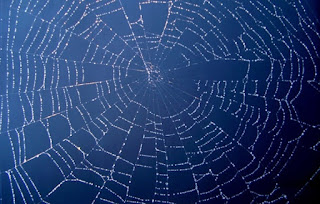 Because of the positive feelings I had about the spider in my dream, I prefer to think of it as a good omen. I am also paying attention to the other symbols in the dream. For example, the spider being on my left hand side (the more logical side of your brain), and my hand suggests receiving something.
As well the colours in the dream were striking to me - yellow means and black striped. As a positive image, yellow can represent hope and happiness while black can mean strength. Both colours also have negative connotations too though. I found a picture online similar to the one in my dream. A yellow and black striped garden spider can be found in my area. Looking at all this information, I interpret this dream to simply be a powerful symbol of good things to come.