Dreaming of the Dead: Messages from Beyond 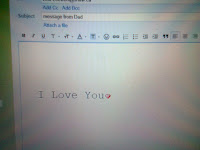 Have you ever had a dream about someone who is no longer in this world? A relative, a friend, someone famous?

A couple of weeks after my dad passed away I had an interesting dream right before I woke up in the morning. I dreamt that I was looking at a computer screen. My dad's full name was printed in the middle of the screen and flashing.That was it. But when I woke up, I knew that I had to check my computer. When I checked my inbox I was excited but not surprised to see that I had a new message from dad! With a little bit of trepidation, I clicked on it. What would it say? Well, it turned out to be a form letter, which was still being sent out to all his life insurance clients, of which I was one. But still, spooky?

I figure this experience could have one of three explanations. First, it was a coincidence that I dreamt about a message from my dad the same morning that I got the form letter on the computer. Second, I could somehow sense that the message would be on the computer, the same way you are thinking about a person and then that person calls. Or third, my dad sent me a message from beyond.

I prefer to think it was the third option and here's why. Before my dad died, he was very sick for a few months during which time we had lots of conversations about life after death. We agreed that if he was somehow able to communicate something to me after he passed on he would. I felt like it was a simple but clear message from him that he had arrived (somewhere)and he was just letting me know. (Like you'd text someone when you arrived at your destination to let them know you're alright.)

Since then, I have had one other "message giving" dream. In it, I saw an image of a Manulife duffel bag (the company he worked for). On the bag was a handwritten message: I love you.
Now, it could be that I was just thinking about my dad and conjuring up words of comfort that I wanted to hear, but I think the Manulife duffel bag was a carefully chosen symbol (by my dad) so I could clearly identify who he was.

Apparently, it's not unusual for deceased family members or friends to visit us in our dreams. Some believe that this is direct communication with the dead. Others believe that the dream images are created by us to allow ourselves to resolve feelings that we have about those people or their death.(I would place my second dream about my dad into this category.) Additionally, as in all dream images, things are not always what they seem, and these people could actually represent an aspect of ourselves.

Anyways, I can't discount the experience I had with the dream and the computer. It left me with a feeling of confidence that there is some kind of "life after death". I also feel a great sense of gratitude to my dad for reaching out to me.

I'd be interested in hearing if anyone else has had a similar dream experience. Please comment below.
Posted by Lisa Loewen at 12:03 PM