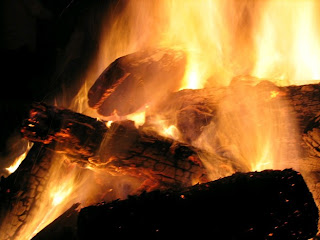 I hear the smoke alarm go off but don't pay attention. It's probably nothing. Then I go into my living room. I notice a burning smell and my cat is pacing around. I look at the fireplace closely and see that somehow burning embers have escaped from the fire grate and have landed all over the room. I'm afraid something will catch fire. When I pull the grate off I see that someone has put way too many logs in. I need to get them out.

Fire is one of the four elements, joining earth, water and air, which means that it is a natural force to be reckoned with.

In reality, it is the stuff of nightmares and fear but surprisingly tradional interpretations of the fire symbol are quite positive. For example, to dream of seeing your home burned means you have a loving family situation. It could also mean success and profit. Maybe that's why the saying "You're burning hot!" is a positive one.

Dreaming of a fire in a hearth represents security in your homelife, if it is contained.

In my dream, because I was concerned that the fire was growing out of control, the fire symbol may serve as a warning that my home life is not as secure as I thought and I'm trying to contain it. It is also a warning to me, to make sure in real life, that I turn off our electric fireplace when I leave the room. I don't want to "play with fire".

Email ThisBlogThis!Share to TwitterShare to FacebookShare to Pinterest
Labels: dreaming of fire, dreams about fire