Dreaming of a Bear 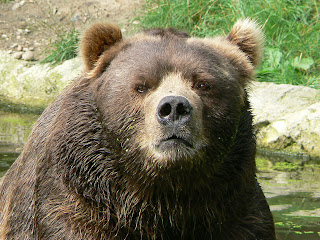 I am in a forest. There is a wolf like creature stalking me. But then I am on the back of a large, shaggy, brown bear. It runs with me out of the forest and into a suburban cul-de-sac. I am safe.

Many people subscribe to the belief of totem animals. Some North American First Nations groups believe that dreaming of particular animals represent the unconscious side of ourselves. Since I've dreamed of bears a few times, I think the bear is one of my totem animals. (According to a psychic, butterflies are another of mine...).

In dreams bears can symbolize a protective mother figure (as portrayed in the Disney movie "Brave"). It can also represent independence or strength. The emotional qualities we tend to associate with the bear are grouchiness and a fierce temper. You do not want to confront an angry bear!

Freud saw dreaming of wild animals as the expression of our basest nature, the beast within. Jung,on the other hand, saw animals as a source of guidance when they appear in dreams.

Helpful animals represent the unconscious part of ourselves that we need to access, perhaps to solve a waking life situation. Talking animals can impart wisdom that we need to hear.

In my dream, there was also the wolf image that I felt threatened by and coincidently, a wolf does represent a threatening aspect (people or situations). So I think the dream was telling me that I do have the inner stregth and bravery to confront the things that threaten me.

Have you ever had a dream about a bear? What do you think about the idea of Totem Animals? Let me know and comment below.
Posted by Lisa Loewen at 1:42 PM

Email ThisBlogThis!Share to TwitterShare to FacebookShare to Pinterest
Labels: bear symbol, bears, dreaming of a bear