Dreams About Aliens (and Guns) 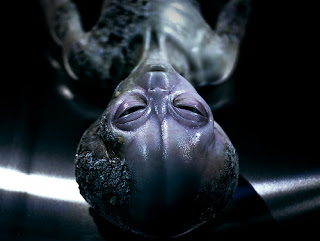 In my dream I am in a basement bedroom that looks like it belongs to a teenage boy. I am with some other people. In front of me there are three small aliens (the grey men kind). I know they are threatening so I pull out a large, black gun. I point it at them and try to shoot but nothing happens. I'm not sure if I'm doing it right so I try again and again. Still nothing. Maybe the gun isn't loaded? Nothing works. A girl beside me then points out that the stuff I was doing with the gun actually vapourized the aliens and they are now gone. I'm relieved.

I have to preface the dream intepretation by saying that I do think this dream was composed of a few different images that I had recently seen in real life. The aliens resembled the ones in the movie "Escape to Planet Earth" which I saw on the weekend and the part about the gun seemed like it was taken from "Stand By Me" that I just watched yesterday. Some people think that is all dreams are - just a series of random images from your daily life that float around in your unconscious at night.Personally, I think that our minds are always trying to create a meaningful story so that's why I still think this dream has something to say to me.

Aliens have become kind of a modern archetypal image. Freud himself might have coined the concept as he discussed the idea of "alien" as whatever is unfamiliar, foreign or uncanny. Jung had a huge interest in the whole alien/UFO phenomena, putting forth the idea that the symbol of aliens is a modern archetype that has superseded the archetypes of angels or demons of the previous Christian Era. In a sense, aliens are our new gods and we project our feelings of insecurity, fears and wanting to be saved on to them.

Dreaming of aliens might mean you actually feel "alienated" or disconnected from people in your life. If you find the aliens threatening, you could be afraid of losing your home or feel like you are being "invaded" on a personal level.It usually has to do with getting in touch with the part of yourself that doesn't feel like it belongs.

The number three is an important symbol in dreams that I have discussed previously. It means a unity of body, mind and spirit.

Freud famously had alot to say about guns being a phallic symbol that could represent power or impotence depending on whether or not it goes off. Generally, a gun represents feelings of aggression/passive agression or authority/dependence. You feel like you need to defend yourself or act agressively towards someone or a situation.


My dream suggests that I felt like I had to confront some "alien" aspect of myself which was hard to do. Even though I was trying to conquer this thing, I didn't feel like I was getting anywhere. But it turns out that what I was doing actually worked or else that the threat went away by itself. I like dreams where I have to confront something and I'm successful.

Have you had any alien dreams? Feel free to share them below.
Posted by Lisa Loewen at 9:25 AM

Email ThisBlogThis!Share to TwitterShare to FacebookShare to Pinterest
Labels: aliens and guns, dream meanings, dreaming of aliens, dreaming of guns