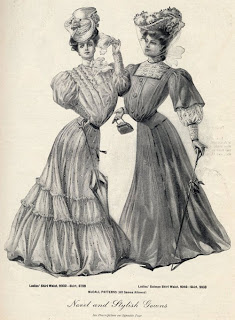 I took a crumpled straw hat I owned into the milliner to get fixed. When it was finished I put it on my head and I looked like a Gibson girl, complete with ringlets around my face. I thought I looked very jaunty and nice. image by antiquephotoparlour.com

I think this is the first dream I have ever had of dreaming of a hat but it seems like it would be an important dream symbol.

Dreaming of clothes in general usually have to do with your self image and how you perceive you appear to others. Jung saw hats as a symbol of thought and new ideas while Freud, as usual, saw the hat as a sexual symbol.

Styles of hats can suggest a profession that the dreamer could benefit from learning from (i.e. a nurse's cap could suggest healing while a policeman's hat represents authority). Hats from a different era could suggest to the dreamer that she has, or could develop, qualities that the era is associated with.

In my dream I first thought the hat was in the 1920's style (a period that I have always admired) but when I really looked at it I saw the Gibson Girl. The Gibson Girl was the epitomy of the American feminine ideal of beauty in the late 1800's to early twentieth century. She was upper class and ladylike but also athletic, independent yet tradional. In fact, she would have been the type of woman that the 1920's flapper would have rebelled against with her long, piled up hair and corsetted wasp-waist.

Dreaming of clothing makes sense to me right now as I am feeling judged by my peers. By putting on the Gibson Girl hat symbolizes the qualities that I wish people would see in me (ladylike, traditional) although by nature I identify much more with the twenties girls.

I would be interested to hear other dreams people have had about hats. Please share in the comments below.
Posted by Lisa Loewen at 8:33 AM

Email ThisBlogThis!Share to TwitterShare to FacebookShare to Pinterest
Labels: dream symbols, dreaming of a hat, dreaming of clothing