Dreaming of a Cat 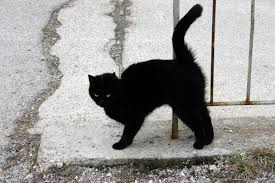 Last night both my daughters had dreams about our cat. Here is one:
"In my dream our black cat got out of our house and was on the road. I was afraid my mom was going to run over her. The cat lay down like she was dead but she wasn't. She leaped up and did a star jump and then jumped into a tree. Then a little white cat with one blue and one green eye was helping us find her."

Cats, like other animals that appear in dreams, often take the form of a helper or guide. (See Dreaming of a Bear). The qualities that cats show, like stealth, independence, curiousity, and the will to survive, can suggest qualities that we need to cultivate in ourselves.


Jung saw cats as a symbol of our secretive or hidden nature. Cats most often appear to women in dreams and suggest womanly or goddess like aspects. (For example, Bast the Egyptian Cat Goddess that has two sides - one devious and one helpful).

In my daughter's dream, the cat represented a pet. Pets symbolize unconditional love while a dead pet represents a loss of innocence or the end of childhood. For a child to dream of a pet suggests feelings of dependency or desiring love from a parent.

I think that in my preteen daughter's dream, the black cat represents her ambivalent feelings of dependency on me (her mother). She might feel like she is struggling with these feelings but the transformation of the cat (the star jump and jump into the tree where she can't be found or touched) suggest feelings of independence. The little white cat seems to represent a helper animal (and coincidentally resembles a pet I had in childhood) that could help her to feel comforted and safe.

Has anyone else had a Cat Dream they would like to share? Or dreams about pets?
Posted by Lisa Loewen at 7:20 PM