Dreaming of Loosing Your Teeth 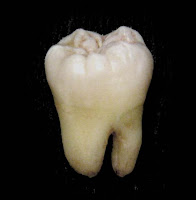 Dreaming about loosing your teeth is usually associated with an anxiety about aging or making a transition in your life. This makes sense because as we mature, our teeth change i.e. we lose our baby teeth as we become an adolescent and we get our wisdom teeth when we become adults. Up until recent times, the elderly would often have lost their teeth which may be why this image continues to serve as a symbol in our dreams representing a fear of aging.

Personally, I have always associated the image of teeth falling out as one of feeling guilty. Maybe this is because the first time I had this dream, I was eighteen and it was after a night of um, doing things that my christian university would not have approved of! But actually, maybe I was just aware of making the transition into adulthood, maybe it was a fear of growing up, being able to do "adult" things.

In his book 10,000 Dreams Interpreted, which has stood the test of time (it was written at the turn of the century), Gustavus Hindman Miller devotes two pages to the interpretation of teeth as a symbol in dreams. As common with most of his interpretations, there is an abundance of folksy superstition about what dreaming about this symbol means. Here is one of my favourites. As you will see, his explanations are quite detailed.

"To dream that you pull one of your teeth and lose it, and feel within your mouth with your tongue for the cavity, and failing to find any, have a doctor look for the same, but to no effect, leaving the whole affair enveloped in mystery, denotes that you are about to enter into some engagement which does not exactly please you, and which you decide to ignore, but will later take it up and secretly prosecute it to your own disquieting satisfaction and under the suspicion of friends."

Much less wordy than Gustavus, but I still don't really subscribe to the idea that dream symbols foretell future events. Rather, I think that the symbol is a reflection of where we are at in our lives. Our unconscious mind has conveniently summed up our situation for us in the form of an image. Very aesthetic of it! That's my view at least. So when you dream of losing your teeth, think of it as an image reflecting your anxiety of the transitions going on in your life rather than a sign that you, or your parents, will soon be greeted by misfortune.
Posted by Lisa Loewen at 7:24 PM