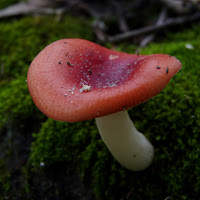 Well, it's official. Now that the Kardashian's have conquered the "real world" they are moving into our Collective Unconscious! Here is a dream I had that contained some very random images.

I was in a forest and in a clearing there was a table set up with crafts to do. My daughter was with me and so was Kim Kardashian. We were making huge (people sized) mushrooms out of black felt cloth. When the craft was finished you could throw the mushroom up in the air and it would billow out as it fell like a jellyfish parachute. Kim Kardashian turned to me and said, "I just want people to leave me alone, you know? I'm so misunderstood."

So, what does it mean? Even though the dream contains lots of images worth investigating, I am going to focus on Kim Kardashian and the mushroom.

Kim Kardashian: Carl Jung believes that we often have archetypal images in our dreams. These consist of myths and legends that have been passed down through time and now have a place in our collective unconscious. In Greek and Roman times, a pantheon of gods and goddesses provided archetypal symbols representing greed, love, pride etc. Today we worship at the cult of celebrity so it isn't surprising that celebrities might figure in our dreams as symbols. If you google Kim Kardashian you will find that she is famous, not for any obvious talents besides her beauty, but for expertly marketing herself. She could definitely be a symbol representing the preoccupation of outer appearances.

Mushroom: Looking through various dream dictionaries online, it seems there are lots of interpretations for the mushroom image. It could symbolize relationship difficulties, unhealthy desires, foolishness in amassing wealth...does any of this remind you of Kim Kardashian? Other interpretations include the mushroom as a symbol of male fertility, a symbol of the human soul, knowledge or enlightenment, or a symbol of magic. My article Dreaming of Mushrooms talks more about the mushroom symbol.

At this point, I'm not exactly sure what the mushroom symbol meant in my dream so I'm going to look at other images presented.For example, the mushroom was made out of cloth which also has to do with appearances and the way people perceive us. In my dream I liked the billowing mushroom, I thought it was cool and it gave me a good feeling so I don't feel like it was a negative image. The image of parachuting symbolizes protection. The dream took place in a forest which is a place of testing or initiation.

So the images of Kim Kardashian and the cloth represent a preoccupation with how the outer self is represented to the world. I think because of the forest setting and the way I felt about the mushroom, I'm going to say it was an image of self-knowledge. The phrase that Kim said about wanting to be left alone and feeling misunderstood seems to represent my own feelings of insecurity about how I'm perceived in the world. So thank you Kim Kardashian for dropping by my dream! Maybe next time though, you could send David Beckham?:)
Posted by Lisa Loewen at 7:38 PM