Dreaming of Mountains and Tunnels

Dream 1) I was up in the mountains somewhere in a different country. They were very steep and jaggedy - maybe like Peru or possibly Europe. There was a Mayan-type structure, golden that looked like a giant snake waterslide. A group of British teachers were going to ride on it as a form of protest.

Dream 2) I was looking for my class outside the school. There was a tunnel that I needed to slide down but the bottom opening was clogged with snow. I was afraid I would get stuck, but I managed to clear it with my feet. When I finally got out, I was at the bottom of a hill. It was an isolated area in a forest but there was a rustic cabin with two mountain-men out front fixing an old car. I had to run up the logging road to get back to school.

Since I had these two dreams on consecutive nights, I knew the symbols of Mountains and Tunnels were important. 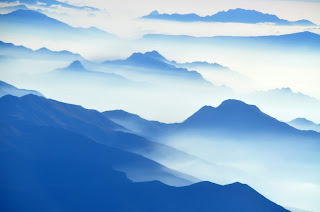 Mountain, as a symbol in dreams, is the archetype for overcoming obstacles.

If you dream of climbing a mountain, you are overcoming obstacles, literally rising above. Standing at the top of a mountain means you achieved success. Conversely, descending a mountain is taking a step back, and you might have trouble reaching your goals.  The steepness of a mountain represents the degree of challenges you need to overcome. (i.e. flat mountains relatively easy going versus sharp points).

Traditionally, mountains were seen as representing closeness to heaven, spiritual enlightenment and elevation. Hermits, those seekers of truth and knowledge, frequently inhabited mountain peaks. In Chinese tradition, mountains were viewed as a symbol of the peace that comes through meditation. 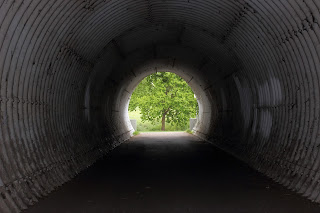 In my dream, the tunnels were slides, reminiscent of a game of snakes and ladders (in the first dream the tunnel was in the shape of a snake - see my post Dreaming of Snakes for interpretation of that symbol.)

In dreams, tunnels take you deeper into the subconscious.  It reminds me of Alice in Wonderland falling through the rabbit hole. There is a loss of control of reality when you fall through a tunnel.

Psychologically, it could represent going through the birth canal so literally a rebirth.

If you can see light at the end of the tunnel, it means you will emerge to positive outcomes but if something is blocking the tunnel, it could be a sign that you have fears or issues that are impending your way.

Like the mountain, tunnels are also a symbol of a obstacle dream.

I find it interesting that I had two prominent symbols of overcoming obstacles in both my dreams. Besides this aspect, it feels like the mountain represented my higher state while the tunnel took me down into the unconscious. I like the fact that I successfully made it to the top in both my dreams, even though the tunnel took me down, I managed to get back up. I take the dreams to be a message that I am going through some stuff that I will, ultimately, be able to overcome.
Posted by Lisa Loewen at 5:49 PM