Do you have a decision to make? Not sure how you're feeling about something? A pendulum might be a useful tool for you to use! 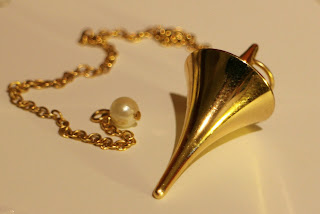 What Is A Pendulum?

A pendulum is a weight suspended from a pivot so it can swing back and forth under the influence of gravity. Objects that have a charm or stone attached to a chain or string are called pendulums and used as tools. It can be very ornate and beautiful, but people have also used basic materials, such as a string with a paper clip on it, successfully for centuries.

How Do You Use A Pendulum?

The idea behind the pendulum is that it responds to energy. So you would start by asking a question (that has a yes or no answer), charge it with giving you a response and observe what direction the pendulum will move. This will be your answer.

Question: Should I move to Cultus Lake? Turn clockwise for yes.

I hold my hand holding the pendulum by the chain over my other hand, the stone a few centimetres above. The stone slowly starts swinging, back and forth a bit and then settles on a direction and starts spinning clockwise, slowly at first and then strong and fast.

It is helpful to ask the pendulum a few easy to answer questions first to establish its own way of saying yes or no. 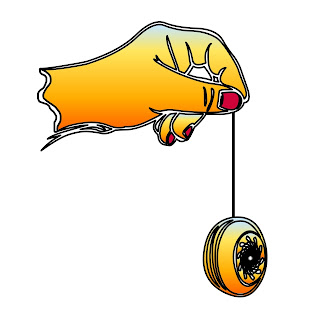 A pendulum can also be used in healing as it will respond to energy imbalances in the body. In my own experience, I held the pendulum over various parts of my body. It did not move until I reached my throat. Then it started turning clockwise like crazy and drew so close to my throat that I felt like it wanted me to swallow it! I have been told before that I have blockage in my throat chakra and I experience symptoms related to that.

Why Does it Work?

Similar to dowsing, the pendulum responds to the energy of the person holding it. I feel like it picks up on my own energy and feelings. So unlike a magic 8 ball or something, the stone doesn't hold the answers, you do. The stone is just telling you how you feel. As in the example above, maybe I really want to move to Cultus Lake.

I had been interested in using a pendulum for awhile when I went into a metaphysical store and saw some made of a variety of materials from metal to wood to crystal. There were so many that I wasn't sure what to choose. The salesperson showed me how to use it and then said to try some out that I was drawn to. I was really drawn to a large diamond shaped green stone on a gold chain. As per the salesperson's suggestion, I asked it "Are you my pendulum?" and it said yes.  My advice would be to buy what you are instinctively drawn to.  As they say, "the pendulum chooses you".

Cautions in Using the Pendulum

As with using any tool, you don't want to become over reliant on it. I would not depend solely on the pendulum's answer in making decisions, especially big ones. You especially don't want to get into the habit of asking it questions for every little thing. I find if I use it too much it becomes very unreliable and almost silly.
If the pendulum is made of crystal you should probably clear or cleanse it before using it. There are some people who think that a pendulum is moved by spirits. While it actually can be used as a tool, like the Ouija board, to communicate with spirits, I think that used in the way I outlined above, it is pretty clear that it is responding to your own energy. But if it makes you feel scared or uncomfortable in any way, don't use it!