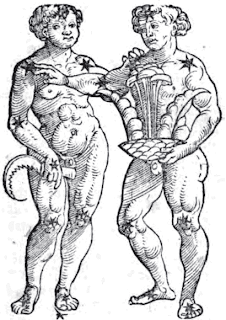 In my dream I am startled by the appearance of twin little boys looking in my bedroom window. I am afraid they might break into my house so I shoo them away. Later on in my dream the same twin boys make another appearance. We are in a building (maybe a Sunday School classroom?) and they are chasing around with some other kids. They have dark curly brown hair and dark eyes. They are wild and mischievous but I'm not afraid of them like I was the first time although I am stressed that they are out of control.

Twins are an archetypal image dating back to ancient times. Most cultures (Vedic, Greek, Celtic) have similar stories about twin boys born to a mortal woman; yet one is fathered by a man and one by a god thus, one is mortal and one is immortal. In Greek mythology, these twins, Castor and Pollux, form the astrological symbol of Gemini. Long story short, the twins stand for patron saints of sailors, travellers, and athletes and often appear at a moment of crisis.

Carl Jung believed that the twin image symbolized two aspects of our personality. If they were not identical, that showed the conflict between the two, if they were, it showed harmony. In my dream the twins were identical.

Sometimes a little boy shows up in my dreams and he has a similar look to the twins - dark brown hair, eyes and complexion. He is very precocious but also serves as a guide of sorts for me. I think of him as my little "animus" (the male aspect of my personality). The qualities of a little boy - curious, carefree, wild, may be something I am struggling with integrating into my personality. "Come out and play" or something like that.

So, my dream...the fact that there were twin boys this time and the way they appeared to me makes me think that I really need to pay attention to them. I do feel like I am shouldering a lot of responsibility right now so maybe I am struggling with that subconsciously. I like the idea that they could be appearing in a time of crisis to help me.
Posted by Lisa Loewen at 8:34 AM