Dreaming of a Piano 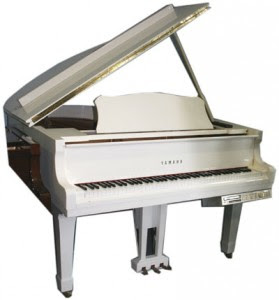 In my dream I was standing in a white walled, white floored empty room. It was a store or something I was renovating. Someone had given me a white baby grand piano. I was pleasantly surprised because I always wanted a grand piano, although the one I wanted was actually black. Some workers, who were also dressed in white, tried to lower the piano into the room from the ceiling with a crane. The piano crashed to the floor. I was relieved to find that the only thing that was broken was a sheet of glass that covered the keyboard called a "tuner". I supposed I could still play it anyways although it wouldn't be in tune.

I have played the piano since I was four but I think this is the first piano dream I have ever had. For me to read that the piano is a symbol for creativity definitely makes sense.

The background of white represents a fresh start or a blank canvas on which to express my creativity.

It was interesting that when the piano crashed the only thing broken was a glass sheet that would not normally belong to the piano. Glass is usually a symbol for a barrier, in this case, a barrier to my creativity? Something that I thought was necessary to be "in tune" was actually not?

I like this dream. I felt it was really affirming of my creative life.
Posted by Lisa Loewen at 9:10 PM

Email ThisBlogThis!Share to TwitterShare to FacebookShare to Pinterest
Labels: dreaming of a piano, white grand piano